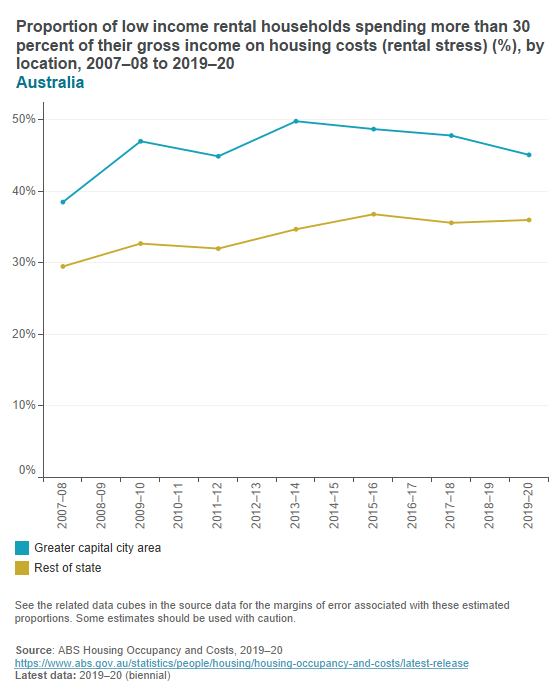 The proportion of low income households in rental stress (spending more than 30 per cent of their gross income on rent) in private dwellings is collected in the biennial Survey of Income and Housing (SIH), conducted by the Australian Bureau of Statistics (ABS). This measure aims to provide data about households with rental costs (including any rates payments that were paid by the household) that may impact on the ability to afford other living costs such as food, clothing, transport and utilities. As this measure is concerned with rental costs, it may differ significantly from measures published in the Low income households in housing stress dashboard which focuses on broader housing costs including mortgage repayments.

The SIH collects detailed information about income, wealth and household characteristics of persons aged 15 years and over in private dwellings throughout Australia (excluding very remote areas) and facilitates the analysis and monitoring of the social and economic welfare of Australians in private dwellings. The household survey has been conducted every two years since 2003–04, with surveys before then conducted continuously from 1994–95 to 1997–98, and then in 1999–2000, 2000–01 and 2002–03. Low income households are defined as those containing the 38% of people with equivalised disposable household income between the 3rd and 40th percentiles (excluding the 1st and 2nd percentiles). Equivalised household income adjusts the results to take into consideration variations in household size and composition.