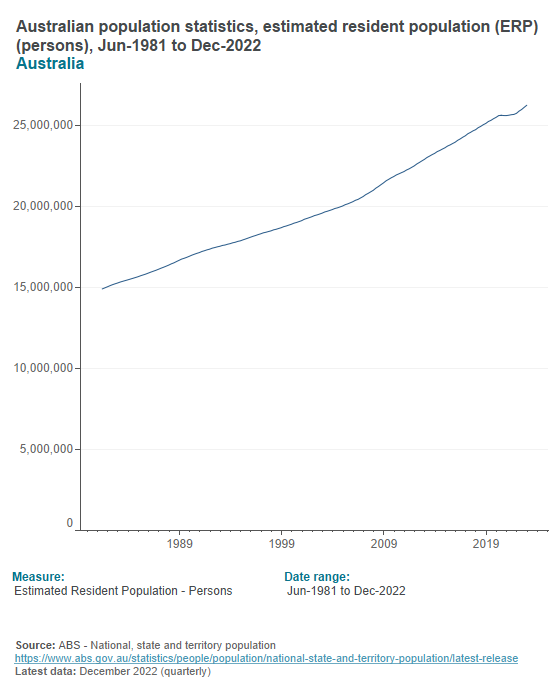 ERPs are based on Census counts by place of usual residence (excluding short-term overseas visitors), to which the estimated Census net undercount and the number of Australian residents estimated to have been temporarily overseas on Census night are added. Estimates are revised annually in June and are finalised following Census. Estimates post-Census are obtained by adding natural increase and net overseas migration to the ERP at the beginning of each period.

The Australian Government closure of the international border from 20 March 2020 during the COVID-19 pandemic has impacted the statistics presented in this ABS release. To ensure the ongoing production of fit-for-purpose official population estimates through the COVID-19 pandemic, the ABS has been assessing the likely impact of changed traveller behaviour on preliminary overseas migration estimates, a component of ERP. The ABS has introduced more frequent revisions to overseas migration to ensure the suite of demographic statistics continue to be of high quality and reflect the timeliest data available. Preliminary overseas migration estimates are revised every quarter over four quarters, instead of once after four quarters, until it becomes final. These more frequent revisions will ensure the timeliest and accurate data flows through to ERP. More information is available in the Information Paper: Improvements to estimation of net overseas migration (ABS Cat. No. 3412.0.55.004).