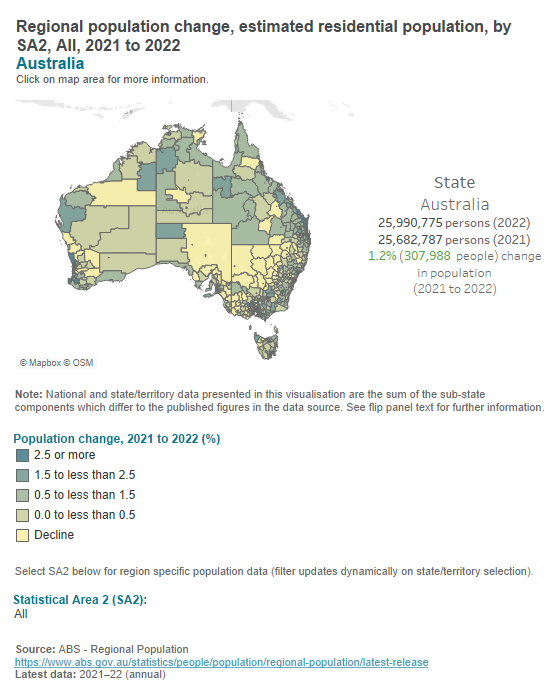 The estimated residential population (ERP) by Statistical Area 2 (SA2), the ERP and ERP change from the previous year, and population density are published in the Australian Bureau of Statistics (ABS) publication Regional Population Growth, Australia.

The ERP is the official estimate of the Australian population, based on Census counts by place of usual residence (excluding short-term overseas visitors in Australia), as of 30 June of the corresponding year. Usual residence within Australia refers to that address at which a person has lived or intends to live for six months or more, with an allowance for Census net undercount, to which are added the estimated number of Australian residents temporarily overseas at the time of the Census. Estimates are revised 12 months from release and are finalised following Census. The ERP for each SA2 (as defined in the Australian Statistical Geography Standard (ASGS) is calculated based on usual residence Census counts in Census years and SA2 populations are updated in post-Census years (from 2016) by adding to the estimated population at the beginning of each period the components of natural increase, net internal migration and net overseas migration. In some very small areas, population change since the previous Census may be assumed to be zero in the absence of reliable component data for these areas.

National and state/territory data presented in this visualisation are the sum of the sub-state components which differ to the published figures in the data source. The data source figures adjust for population movements not captured at the sub-state levels. If more accurate national/state/territory population changes are needed, users should seek the data from the ABS source publication. Additional information about the methodology is also available at the data source.